It’s no secret that newspaper classified ad revenues have fallen dramatically since craigslist became a major player in that market. David Boardman, executive editor for the Seattle Times wrote a column claiming that in 2000 classifieds made up as much as 50% of total ad revenue for the company. This year, that number has fallen to 20%. In the same period, craigslist revenue grew from practically nothing in 2000 to an estimated $80-100 million for 2008. I’m not going to try to prove causality, but bear with me while I try to explain what I think is obvious.

While newspapers were busy squeezing every last penny out of internet page views and paid classified advertising, Craig Newmark was unknowingly creating a classified empire. Craig’s system is far better for people because it is free (for the most part) and doesn’t assault the eyes with mind-numbing banner ads. The layout is clean and adheres strictly to KISS principles.

At this point in the conversation, newspaper buffs seem to take a defensive position. Usually they make some outrageous claim like “How can we compete with craigslist? We’re running a for-profit company here!” First of all, it’s true that craigslist started with a flavor of altruism and was likely losing money at first; but that’s not the case anymore. That argument might have worked in 1999, but its no longer relevant because craigslist does make money and lots of it! Plus, the popularity of craigslist continues to grow while the popularity of newspaper classifieds continues to fall. This is what that argument really says: “We were too shortsighted to see that our classified ad revenue figures were artificially inflated because our system was ultra-vulnerable to competition that didn’t yet exist. We put up far more risk than we could stomach and now its too late to take it back.” Fair enough, not everyone can be a visionary entrepreneur like Newmark.

I couldn’t resist making a nice big desktop wallpaper for my dual monitor setup out of the cool new hardy heron ubuntu artwork. I found the vector graphic file to work with, and simply widened it up and moved the heron further to the right using Inkscape. I exported the bitmap and touched it up a bit in the GIMP, and I’m posting it here to save others the 15 minutes I took to do it. 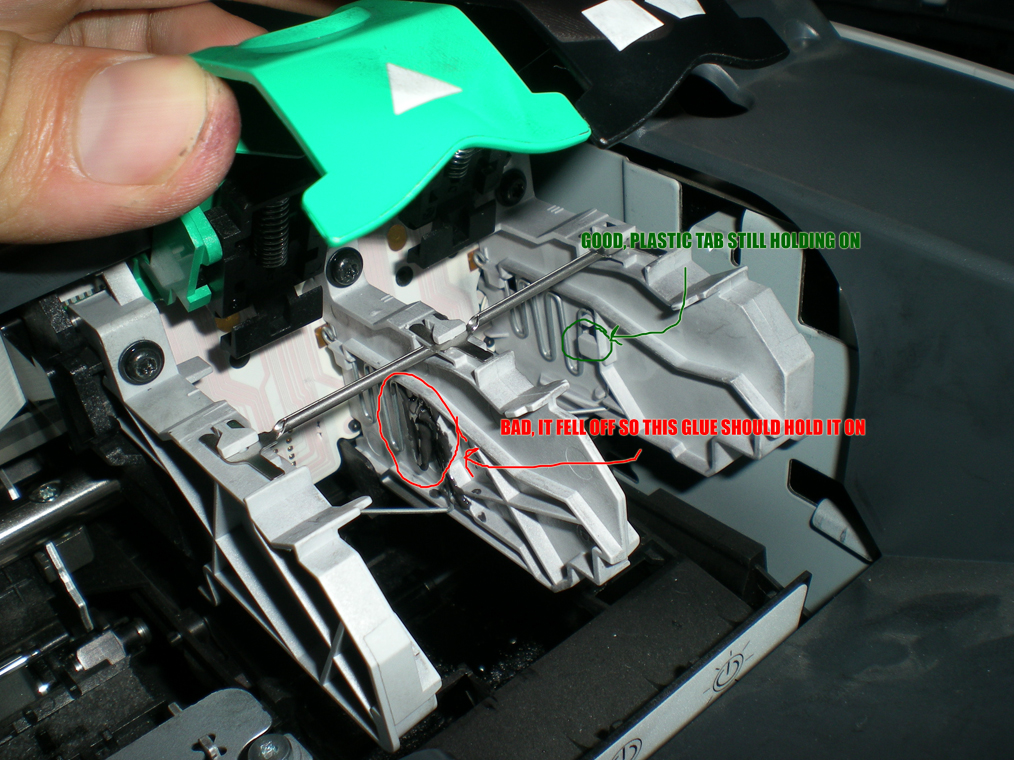 This type of error normally comes up when the printer can’t talk to its print head (when talking about the kind of printer that has its print heads in the cartridge itself). So after talking with tech support, I found that this printer was just out of its 12 month warranty (of course). So the next step in any kind of troubleshooting is to scour the net for the exact error message. Just take a look at what’s out there for a moment. What I was hoping to find didn’t exist at the time, so I’m writing it up.

Obviously the next step in any self-respecting geek’s predicament is to take it apart. Taking things apart is fun, try it out and learn all about how things really work. After taking most of the printer apart, I was able to get a really good view of what I thought was the problem. Taking it completely apart wasn’t really necessary, but it was fun.

As you can see, there is a spring on the black (right) side of the carriage that appears to push the cartridge to the extreme left side of its little container. It looked normal while the other spring in the color (left) side was left dangling. Upon further inspection it was obvious that a plastic tab had formerly existed in the color side to hold the spring in just like the black side. When I push the spring back into its place and bend it to the right with my finger just like the cartridge would, it falls out.

Why would anyone shell out big dollars for the latest and greatest software suite when free software works just as well? Sometimes we like to have the support, sometimes there’s a cutting edge-feature that we have to have, maybe we’re used to a certain software company’s interface.

For the rest of us who don’t like to pay annual cash tributes to software companies, there’s countless free and open source software suites out there for anyone who wants to brave wild west of the free software world.

Backup seems like a very simple concept. The idea is to make an extra copy of important data so in the event of a failure or disaster, that data can be promptly recovered. But anyone who’s been through the data recovery process knows that its just not that simple.

There are a staggaring array of different choices to make when designing a backup solution. The decisions you make will be determined by the type of data and amount you need to back up, your reliability and downtime tolerances, and your budget. A good backup solution can be as simple as a USB thumb drive to hold backup accounting records or as complex as the most advanced disk to disk to disk solutions for backing up legacy database systems.