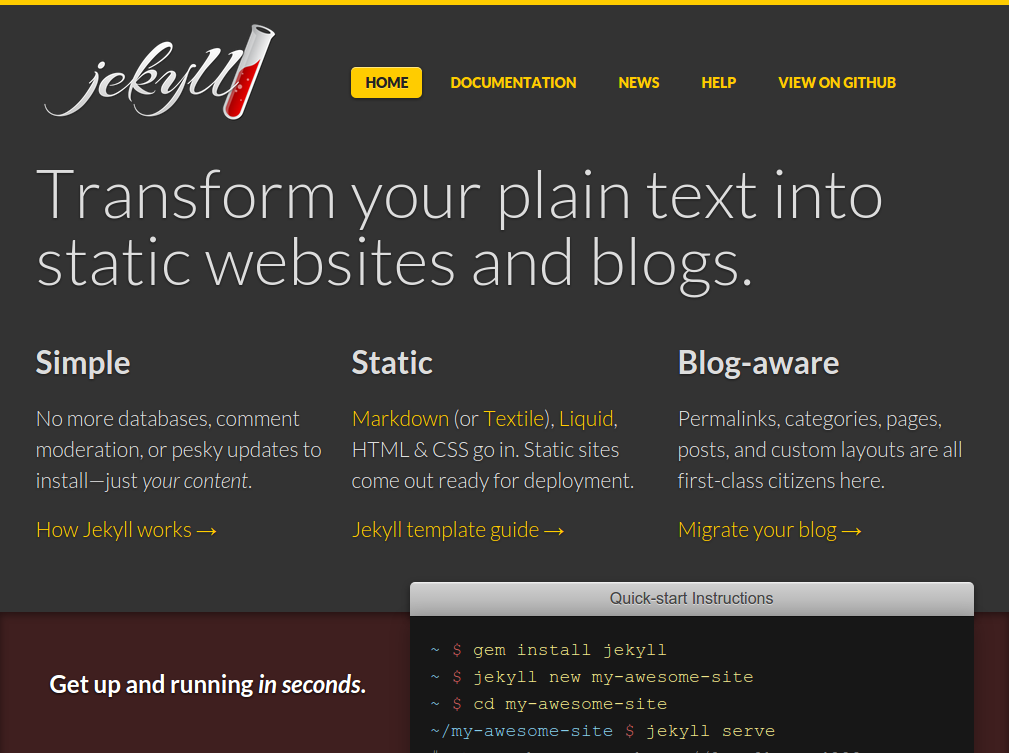 Working on Wordpress means writing themes and plugins. You have a few options for where to do this development. You can develop on your live server, which sucks, but I think it is what most people do. You can set up a copy of Wordpress on your laptop including PHP and MySQL and Apache, trying to minimize the differences between your development and production environments. You could also set up a staging server as a copy of your production server and work out the details of shipping code from there to production. But Wordpress doesn’t give you much to help with the development workflow.

With Jekyll, you can set up a whole development environment with the built-in web server: jekyll serve. Jekyll automatically watches for changed files and reloads the server for you. Since the output is just a bunch of static files, the only possible differences between your development and any other environment is the web server and its configuration. I haven’t run into a single problem there.

When you develop using Wordpress, there’s a bunch of problems that you have to solve yourself. Where do you keep your source code? How do you test it? How do you install it? Will there be any weird interactions with other installed plugins or some remote database state? You may keep your source code in git, but you could ship it by uploading a zip file or copying it to your server via FTP. With Jekyll, you keep the entire platform in source control and you can deploy it anywhere by blindly copying all the files to a remote location. Any problems should be clearly visible before you ship.

With Wordpress, this is pretty simple. You just install mysql, php, some php extensions and a web server (regular LAMP stack stuff). Then configure the web server, run the web-based wordpress install script and you’re ready to go.

But it’s even more simple with Jekyll. Jekyll needs only a filesystem and a web server with no special configuration beyond what is required to serve static files. It’s so simple that you can deploy Jekyll as I’ve done, with Amazon S3.

Backing up any system like wordpress is a pain. The Wordpress application is essentially a bunch of PHP files on disk. These files live right alongside themes (both enabled and disabled), plugins (both enabled and disabled), uploaded content, environment-specific configuration and whatever else someone put in that folder. You probably have to back up the whole thing because who knows if someone has hacked the core Wordpress files. You can configure where all these different files go and you can try to make sure people don’t hack Wordpress itself, but the default configuration throws all these files into one big, happy directory tree. So it’s just like most other PHP apps. Backing it up perfectly means taking a DB snapshot at the exact moment that you take a filesystem snapshot. In my experience, this never happens and everyone is just ok if the filesystem and DB backups are slightly out of sync. This is easy enough for any decent sysadmin. But I’ve seen a lot of Wordpress sites and the only ones I’ve found with adequate backup are the ones I’ve deployed myself.

For Jekyll, assuming your Jekyll site is in source control, then you already have a backup, so there’s nothing to do unless you want to backup your backup. I’d encourage that. If you use something like git then as long as you have the repo cloned in more than one place, I’d call that a pretty good backup plan.

Comparing Wordpress to to Jekyll in a performance test is in some ways unfair. But since for me, the applications are filling the same function, I have to do it. Running Jekyll means serving static files. This means even the most basic installation will be serving up the entire site from a filesystem cache. Since everything is static, the entire site can be served up through a CDN with very little effort.

Wordpress can and should be setup with a decent cache, but it’s not an easy task. There’s a million caching plugins, each one with its quirks. I think I had my Wordpress site running fast on a filesystem cache at one point, but it stopped working after an upgrade and I never figured out why. In other words, Wordpress can compete with Jekyll if you spend the effort required to cache everything. But who wants to spend time on this stuff?

There are ways around this problem. For instance, I could use a hosted search solution such as:

Or I could force the browser to do the searching using something like lunr.js which seems pretty attractive. This is not a win for Jekyll, but its something I can work around if I must have search.

Any other dynamically generated pages cannot work in a static-only site. For instnace, I switched my comments to Disqus last year because I anticpated wanting to move to Jekyll. I won’t pretend the lack of dynamic pages isn’t serious limitation, but there are a lot of creative solutions out there. In the end, I decided to give up dynamic pages to gain all of Jekyll’s other benefits.

Wordpress makes the job of an author very easy. There’s a slick auto-saving interface with fancy, custom UI for adding tags and categories as well as for writing posts themselves. The default post authorship UI control is known as a WYSIWYG (what you see is what you get) editor. These things resemble typical word processing programs to some extent and that makes non-techies feel fairly comfortable using them. The WYSIWYG editor does its best to convert your chicken scratches into HTML so it can be served to your users. But if you’ve used one more than once, you’ll understand what I mean when I say what you see is not always what you get.

The learning curve here is a bit steeper in Jekyll. By default, in Jekyll, you write your pages and posts in Markdown. It takes a little getting used to, but by writing in markdown, you can have a lot more control over the resulting markup and I think the results are worth it. There are a few great live markdown editors out there. Dillinger is one.

In Jekyll, all your post metadata, including tags and categoires is part of a YAML snippet known as front matter. If you’re used to a GUI, then this is a step back. But I’m very comfortable editing YAML by hand, and it is nice having it all in the same document.

The Winner is Jekyll

Jekyll won me over. I’ve been planning this move for a while, but didn’t really get started until google sent me a warning about how bad my site was working on mobile devies. I didn’t realize how much I’d grown to dislike Wordpress until I was faced with the thought of writing a new Wordpress theme. Instead I switched to Jekyll. And I’m glad I did.